Have you ever been hit by a cyclone in Madagascar? No? Lucky you…

While we stayed three weeks in Madagascar we had a couple of days on the northern island Nosy Be. It’s an island crowded with Italians enjoying sex tourism and the nature. We should have known that earlier. It was kind of embarrassing having 70 year old men sitting at the breakfast with their 16 year old peach of a girl. Nevertheless Nosy Be is a beautiful island, imprinted with a near-death experience because of an immense cyclone hitting Madagascar in 2008.

Cyclones are storms with a lot of rain. Ours was called Cyclone Jokwe.

The day we departed was windy and stormy. After looking out of our hotel room we went to the reception to ask whether there’s a storm coming. Their answer was a clear “No! It’s only bad weather.” Good, we thought and packed our things to leave. A very nice taxi driver picked us up and started his way to the 15km away airport. After 10min it started raining like hell. Combined with a very strong wind we were happy to sit inside. Wind-swept palm trees felt on our taxi and the whole electricity was already on the floor, giving off sparks. 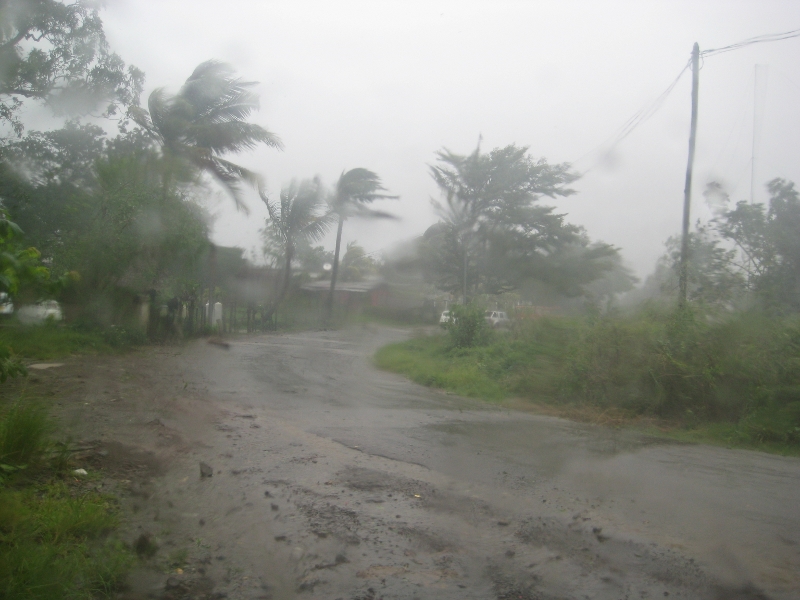 You can imagine that we were a bit scared. In that moment we didn’t know that it’ll become a lot worse.

Immediately the street was flooded. Our taxi driver was very optimistic, accelerated and drove through this river. He made it, but then the engine went off. Where to go now? We were stuck in the taxi. Corrugated iron roofs were flying around, ready to cut our heads of. It wasn’t safe at all to leave the car, but it didn’t seem to be safe staying there either. 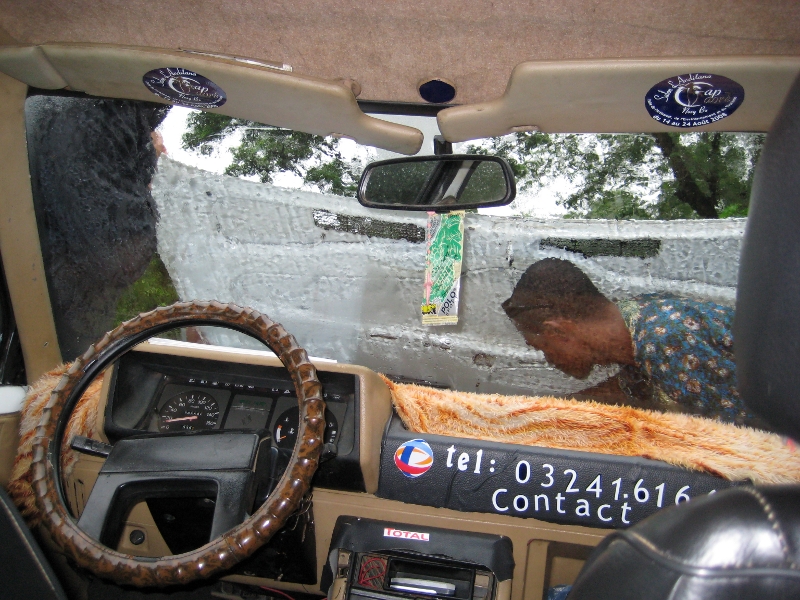 From the middle of nowhere another taxi came by asking if we need help. Our angel drove us then to the next town, Hell-Ville. Nomen est omen.

We told him that we need a place with solid walls, maybe a hotel if possible.

He found one and after a while of negotiating they were willing to give us a room. The only one left was the suite. But having several items flying around next of our heads we were happy to have a place to stay, no matter how much it is. 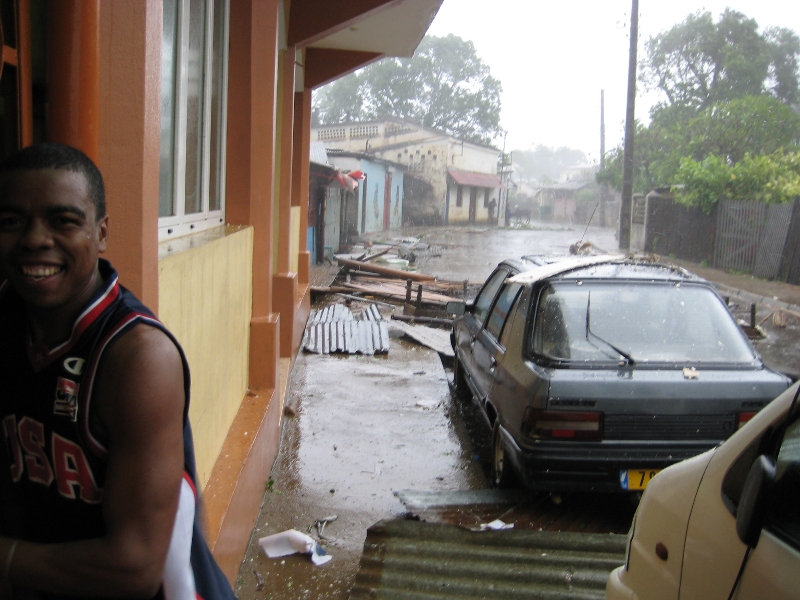 With our two backpacks we climbed up the staircase. The hotel was open on two sides, which means that the strong wind got even more power. In the moment I arrived on the third floor and walked around the corner the wind caught me and pulled me off my feet. I flew horizontally in the air! 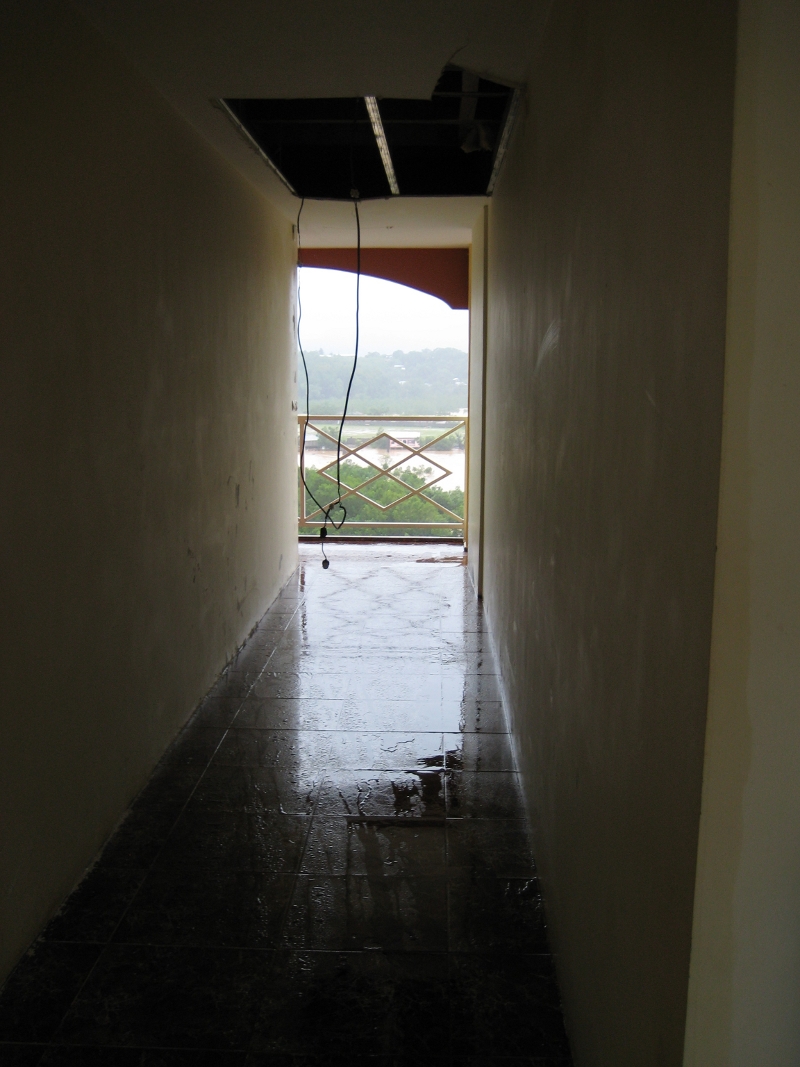 The taxi driver was fast enough to grab my arm and with the help of my husband pulled me around the corner. Unbelievable that wind can have such a power! Later it was in the news that it had 200km/h speed.

No we tied us together with the backpack straps and crawled to the door of our room. 10minutes later we made it and stood inside. The best feeling in my life! I would have died if the taxi driver wouldn’t have caught my arm. Some meters behind the corner was the balcony and the abyss.

Due to the wind the whole hotel room was flooded. The wind pressed all the water through the wall into the room. No reason to complain. We were as happy as never before. 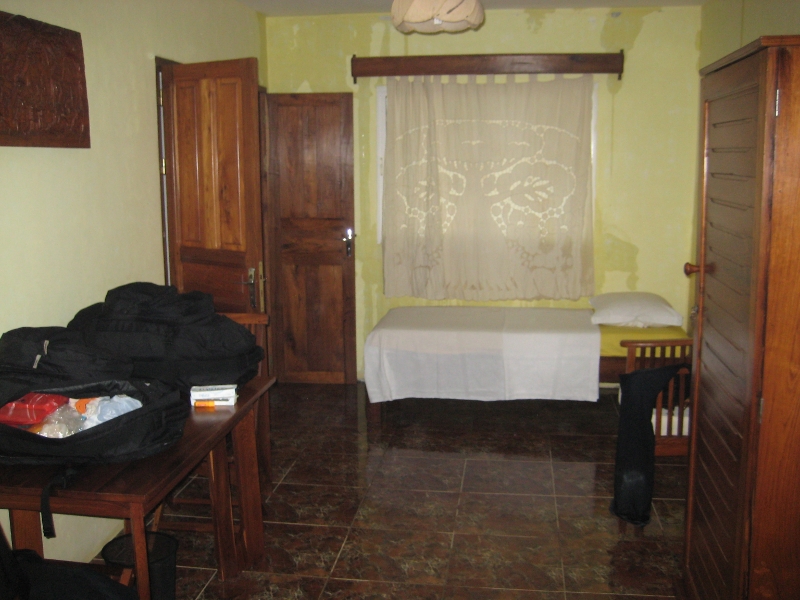 It took hours until the wind lost his power. More than 400 people became homeless during that cyclone. It was almost 200 km/h fast, sure they lost their houses, roofs and everything they had. 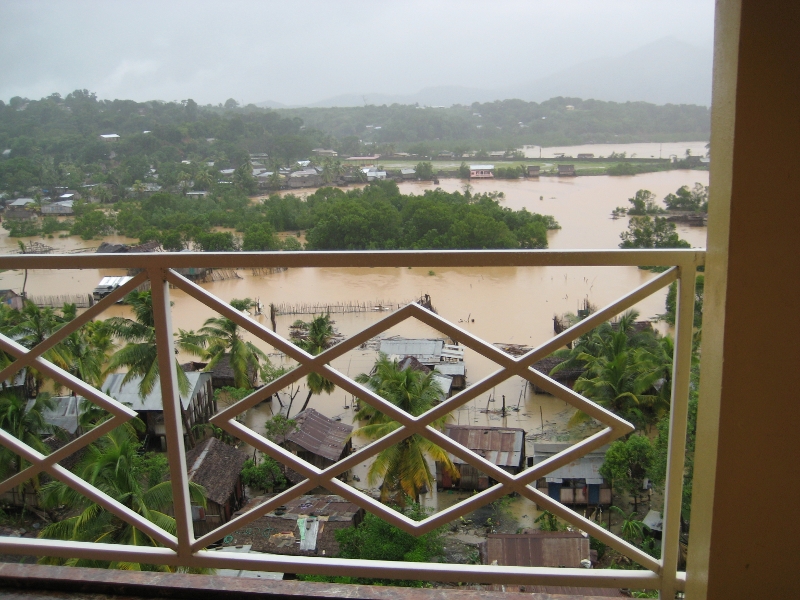 With huge relief I remember that experience  to be alive. It changed me and my focus: let’s life NOW! Not tomorrow or next year. 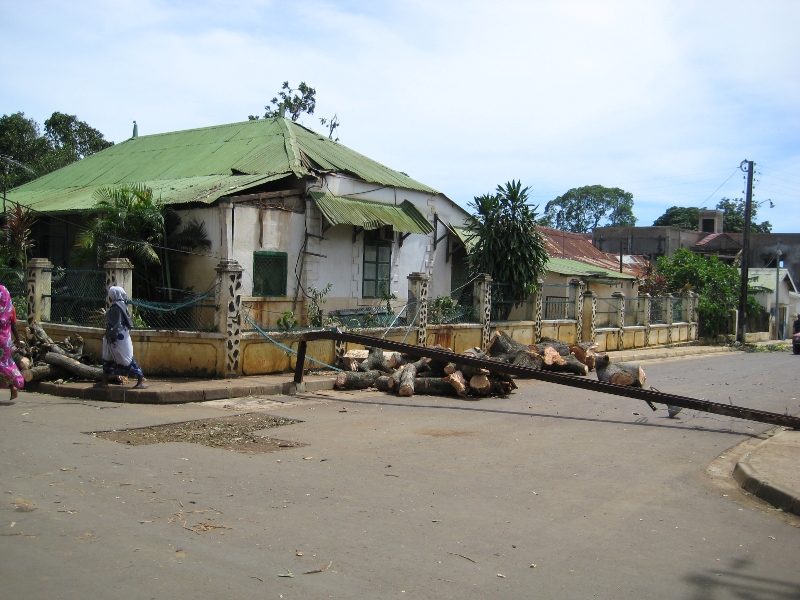 What made you rethink your lifestyle? Are there any key situations in which you changed directions? Please share in the comment area.

Barbara is a mother of 2 daughters, 3 and 5 years old. She's a managementcoach and psychotherapist and loves to combine psychology with everyday experiences. Travelling is her world while she still gives courses at different universities. She loves tea, online research and chats with nice friends.
View all posts by Barbara →

This site uses Akismet to reduce spam. Learn how your comment data is processed.